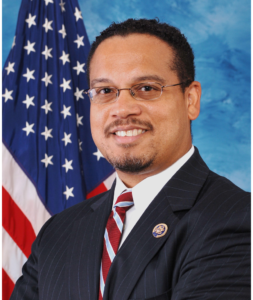 All are welcome to hear Minnesota Attorney General Keith Ellison give the LWVE Annual Meeting Keynote Address on Thursday, May 20 at 6:00 PM via Zoom. He will speak about his work, including his pursuit of racial justice and police accountability in the courts.

The event is free and open to all. LWVE members will receive the Zoom link by email before the event. Non-members may register to receive the link.

Keith Ellison was sworn in as Minnesota’s 30th attorney general on January 7, 2019. He is the first African American and first Muslim American to be elected to statewide office in Minnesota.

Prior to his election as Attorney General, Ellison served as a legislator, first in the Minnesota House of Representatives for four years, then in the U.S. House of Representatives from 2007 through 2019. As Congressman for the 5th Congressional District, Ellison championed consumer, worker, environmental and civil-and-human-rights protections. Before entering elective office, he spent 16 years as an attorney specializing in civil rights and defense law, serving for five years as executive director of the Legal Rights Center.

Now the “Peoples’ Lawyer,” Attorney General Ellison defines his job as helping Minnesotans afford their lives and be able to live with dignity, safety and respect.