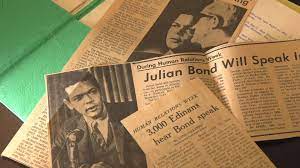 This article is based on newspaper clippings and other materials from the files of Mary Lou Judd Carpenter, who served as a member of the first Edina Human Rights Commission. These materials were generously loaned to the author.

In 1970, Edina was still incorporated as a Village. Like much of the world, Edina residents were still processing the events of 1968, when Martin Luther King and Robert Kennedy were assassinated and America’s failures to enact and enforce civil rights had once again come into focus. A new generation of Black leaders rose to the fore, among them Julian Bond, a Georgia state representative who had made a national name for himself by co-founding the Student Nonviolent Coordinating Committee (SNCC) in 1960. The boyish-looking Bond was just 30 years old in 1970. It must have felt like a coup for the brand new Edina Human Rights Commission (1) when they managed to book a visit to Edina by the famous Julian Bond during his three-day visit to Minnesota. He was the keynote speaker during an ambitiously planned and executed Human Rights Week that included a daylong women’s forum (topics ranged from women’s liberation to racism and ecology) and a mixed media exhibit, “Color Me Mankind,” in Southdale’s garden court. Bond also spoke to the Greater Edina Chamber of Commerce at a luncheon held at the Hopkins House restaurant.

On the morning of Monday, October 12, an overflow crowd of Edinans, estimated at 3000, gathered in the high school gymnasium to hear Julian Bond speak, according to an article by Anne Gillespie in the Minneapolis Star. He pointed out the unequal sacrifices of Black Americans in the Vietnam war, noting that Black people are “first in war, last in peace, and seldom in the hearts of their countrymen.” (Star) Though advances in civil rights had begun, “‘the average black American is still worse off than the white.’” He added that “‘The roots of the problem are deep in the fabric of the country….It started with that most basic and evil kind of prejudice — that property is more important than people.’” (2) Gillespie reported that “Bond compared what he said was a slowdown on the part of the Nixon administration to enforce integration of Southern schools and its reluctance to back voting rights for blacks with the Rutherford B. Hayes administration in the late 1800s that ended the period of reconstruction in the South.”

Bond appealed to his largely white audience for their help in advancing integration and civil rights. “‘You can help solve it, but not if you’re so worried about crime that you put bars over your windows and your heart; not if you think if black people move into your neighborhood, it will go down in value; not if you don’t get as excited over the killing of blacks as you do over Kent State.’” 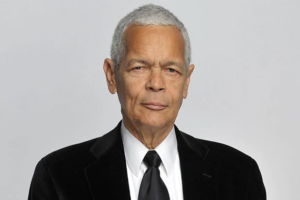 Bond was no stranger to the culture he found in Edina. The son of a college president and a librarian, Bond had attended a private Quaker boarding school (3), where he would have encountered many privileged white students. His Quaker education would also have fueled his early opposition to the Vietnam war.

During the Q&A session, Gillespie reports, Bond said he supported busing to achieve racial balance in schools, that the Black Panthers Party was primarily a political party like any other, and that he would vote for Hubert Humphrey for president (4).

The Minneapolis Tribune reporter, Dan Wascoe, Jr., painted a different picture of Bond’s speeches at the high school and  later at Hopkins House. His article says Bond told Edina students “they were living in a white enclave” and told the men and women at the luncheon that “it must be ‘extremely comfortable’ and ‘a little boring’ to live in Edina.” According to Wascoe, “It was a soft-spoken Bond, gently needling his audiences. And when they crowded around afterward to take pictures and request autographs, his little Mona Lisa smile made it hard to tell whether he was greeting, mocking, or tolerating them.” During his speeches, Wascoe reported, “just when his mostly white liberal audiences may have been settling back, thinking they’d heard it all before and agreed, Bond would stick in the needle. He told the students they ‘cannot afford the luxury of Woodstock…Each of us has the ability to do something’ to fight poverty and racism.” And later he told the adults: “‘The oppressed people of the world ought not to permit peace in the world until they get power or until they’re destroyed’ by those wielding power” (5).

To modern ears, Bond’s words sound a lot like today’s cries of ‘No justice, no peace’ — words that inspire some people and threaten others. It did sound to some like he was flirting with violence. Wascoe reported: “Asked whether he could imagine himself picking up a gun and shooting a white man — and if so, which one — he said he thought he could. And even though he tempered his remarks later, saying he opposed violence on both moral and political grounds, he obviously impressed his audience. Two men, discussing Bond’s luncheon talk on the way out of the Hopkins House in Hopkins agreed that if Bond was talking that way as a respected ‘radical-liberal’ what must the real militants believe?”

But Wascoe’s headline was not about violence or poverty or racism. The headline was Bond Characterizes Edina as ‘a Little Boring.’  It was taken from Wascoe’s statement that, in answer to a question at the luncheon, “Bond said Edina living must be boring because its residents must hear ‘the same conversation at every cocktail party.’”

A subsequent Letter to the Editor from Roger F. Heegaard, who attended both events, challenged Wascoe’s reporting: “The implication of [Wascoe’s] headline, ‘Bond Characterizes Edina as a Little Boring’ could be interpreted by readers as a slur by Bond. The fact is that in answer to a question in which the questioner stated that people in Edina were much alike, Bond indicated that he wondered whether that would be a little boring. Heegaard goes on to say that “In both addresses, Bond’s theme was the need for working within the system to eliminate the injustices that cause violence. He called upon citizens of Edina and all the suburbs to work to eliminate the inhumanity of man to man, and on several occasions he sounded a good deal more like a preacher than a politician.”

Both Heegaard and Gillespie noted the standing ovations Bond received after his speeches. Wascoe did not.

As the League of Women Voters Edina works to eliminate discrimination and systemic racism in our community, Bond’s words continue to resonate.

(1) The group had been meeting as the Edina Human Relations committee since 1968, becoming a Commission in 1970. https://edinaextras.org/timelines/humanrights/